Two contemporary microphone brands with very different approaches to microphone design are excited to announce their collaboration. Soyuz Microphones is known for creating high-end modern classics — microphones designed and hand manufactured in the same fashion as the iconic vintage transducers of yesteryear. Townsend Labs, on the other hand, are the inventors of multi-dimensional mic modeling, and the Sphere Microphone Modeling System relies on cutting edge digital technology and modern microphone manufacturing methods. The first outcome of the concerted effort is the forthcoming inclusion of an officially commissioned Soyuz 017 TUBE model in the Sphere plug-in, the software component of Townsend Labs Sphere L22 Microphone Modeling System. Release date to be announced.

“I’ve been paying close attention to the hand-crafted Soyuz microphones for years. The design first caught my attention, but their reputation and sound made the combination worth capturing and sharing.” States Townsend Labs Co-Founder, Erik Papp. “The timing and chance to collude with the Russians made it hard to pass up.”

It is with great pride and excitement Soyuz Microphones and Townsend Labs announce their new collaboration. The first outcome of the joint effort is an officially endorsed model of the Soyuz 017 TUBE microphone, which will be added to the already impressive collection of high-end microphones in Townsend Labs’ Sphere plug-in. 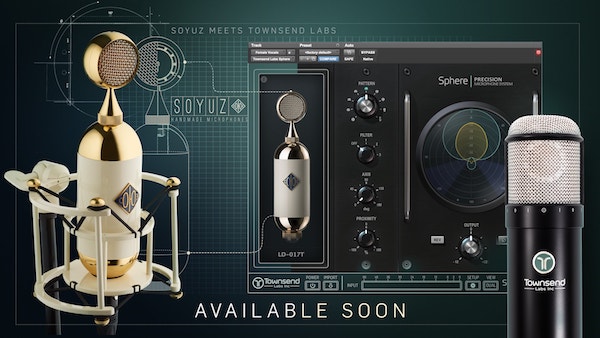 «I had heard nothing but good things about The Sphere and was immediately intrigued when my colleague, Sammy Rothman suggested a collaboration with Townsend Labs. After speaking with Erik at NAMM, I became convinced that the project could be something really special. There’s something compelling about two companies that are so different being able to cooperate to create something useful to the recording community. Soyuz is based on 100% old school handmade manufacturing and Townsend is the very essence of all that is cutting edge and high tech in pro audio. It’s an honor and pleasure to be involved with such an interesting and innovative company.» — David Arthur Brown (President of Soyuz Microphones)

The Soyuz 017 TUBE model will be included in a forthcoming update to the Sphere plug-in, which will be free to existing Sphere owners. The release date yet to be announced.

Soyuz Microphones was founded in 2013 on the belief that combining Russia’s rich tradition of microphone manufacturing with Western design, quality control and marketing could produce a line of products that could be compared to the classics of yesteryear without trying to clone them. The word SOYUZ (союз) means union or alliance in Russian. Musician David Arthur Brown (Beck, Brazzaville) and businessman Pavel Bazdyrev have managed to build a true union combining the best that both of their cultures have to offer. Based in Tula, Russia and Los Angeles, CA, Soyuz has gained a worldwide reputation for producing true modern classics that even the pickiest of vintage mic aficionados feel comfortable using in their studios.

Win a Launcher!
Most Recent Posts
T
Win a Launcher!
What Makes the 013 FET So Special?
Make Your Kick Drum Sound Kick-Ass
Backstreet Boys Re-imagined: Engineer Chris Bethea Chats About Recording a New Version of the Iconic Single with Soyuz mics 20 Years Later
This error message is only visible to WordPress admins


Error: There is no connected account for the user false Feed will not update.