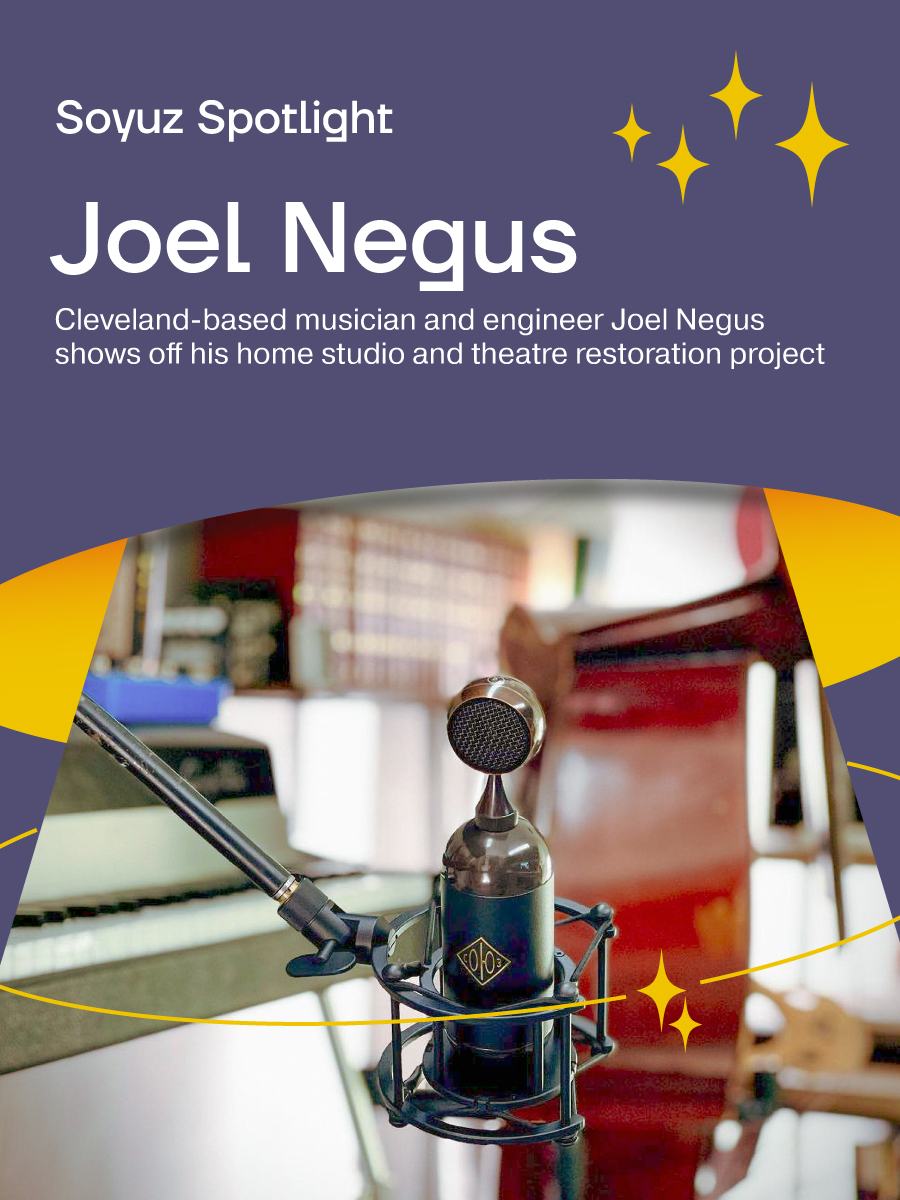 If you check in on Joel Negus’ Instagram profile, you can see that the man knows how to grind.

“It definitely is not nearly as pretty in real life as Instagram can make it look,” Joel says.

The Cleveland-based father of four has been busy funneling his passion for music into several distinct projects. In 2019, Joel and his team began rehabbing the Heights Theatre and turning it into a recording and performance space. When the pandemic dealt the crew a blow, Joel started turning his attic into a recording space where he worked to further his engineering and production skills.

Taking a break from building out custom wooden acoustic treatment for the theatre, Joel sat down with Soyuz to talk more about what he’s been up to the past few years. Continue reading below to learn more about Joel’s production space, his love for our 017 TUBE mic, and the rehab process of the Heights Theatre.

I noticed you play a lot of instruments, but after reading a bit, I found out you went to school for double bass. How did you originally get started in music? What led you to study double bass?
Both of my parents are professional musicians. My mom is choral conductor / educator and my dad is a session player / producer. He had a (purpose-built) home studio well before it was a trend (late 80s!!) and that’s literally where I grew up!

I was in a band in junior high / high school called Born of Osiris (originally Diminished) where I played guitar. I wanted to play in the orchestra at school and the bass was tuned the same as the electric bass, so I jumped in very late in the classical world at 15 years old.

How’d you get involved in record production? Did you receive any formal training in school or just start building out a studio and begin recording on your own?
I have never had any formal training in recording, but I’ve been recording things as long as I can remember! Mostly recording myself, my band, and friends. This was an every weekend sort of thing for basically all of my childhood. I made a ton of recordings on a Tascam 8-track as well as assisting with my dad on lots of sessions, learning the trade by singing on a ton of commercials in the 90s. Eventually, when I went to school at the Cleveland Institute of Music, I began recording soloists and chamber ensembles regularly in the classical world in Cleveland. I was definitely focused on performing at the time, but recording myself and others was always there.

When did the buildout of your current home studio start? What was the plan at the beginning and how does it compare to where you’re at now?
It was never my intention to have a home studio. In fact, starting back in 2019, I began [slowly!!] building out a commercial studio in an historic theater on Cleveland’s east side. When the pandemic hit in 2020, I began setting up gear that I’d acquired over the years in my attic. At that point, most of my freelancing was as a performer and that’s definitely what I focused on in my 20s. But the pandemic dramatically shifted my freelancing to focusing on this urge I had when I turned 30 to “find my voice” as a musician, composer, and producer. Composing and producing for others became my main focus at that point.

My composition studio is definitely far more than what I ever envisioned having at home. I began posting experiments on Instagram and found a wonderful little community of people much to my surprise. I began doing work with some companies (pedals, instruments, etc.) and the gear just seemed to keep increasing to where it is now – overloaded, but organized around my workflow. It has been a process to learn a system to purchasing / selling instruments, but I definitely find myself in a place trying to keep things simple, accessible, and regularly used in the studio. 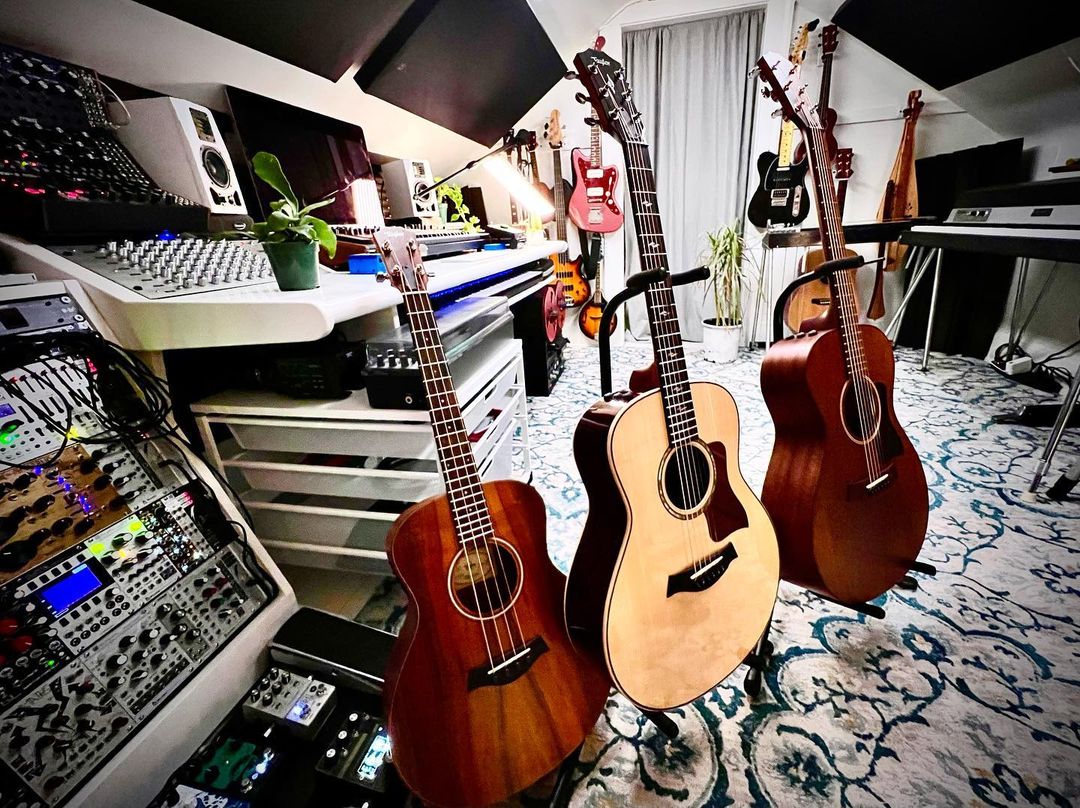 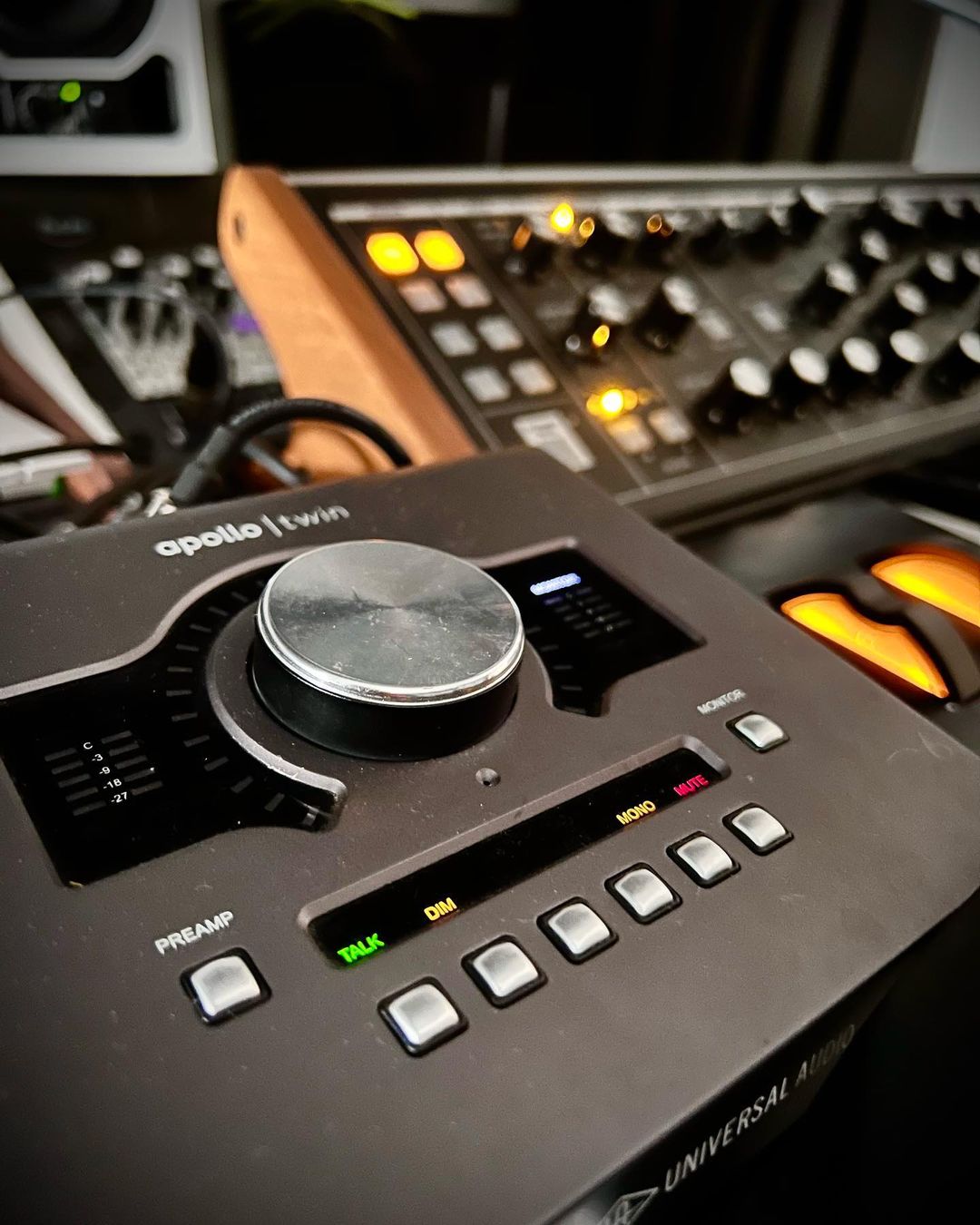 Talk about your basic workflow. What are some of your outboard favorites? What interface are you working with?
I write as a performer. The majority of my life has been lived as a performer, so I wanted to build a workflow around that. I have never really been an in-the-box musician, so I’ve found myself incredibly inspired by the tactile nature of my workflow, often beginning with an idea on a given instrument and building from there.

My goal was to have only two steps to be able to track any instrument in the room, whether that be a synthesizer, a stringed instrument, or voice. Through use of a patch bay, my main instruments are normalled to always be accessible and everything else is wired through a snake to only be one patch away. The brain of my studio is very simple. I run the UAD ecosystem with a Universal Audio Apollo Twin, Satellite, and 4-710d preamp over ADAT. 10 channels is more than enough and most of my rack space is taken up by synthesizers.

You have an amazing array of synthesizers, both stand-alone and modular. How’d you get into synths? What are some of your favorites in your collection?
I’ve often described how I operate as a “sound first” sort of guy. Sound is the foremost way that I interact with the world. When my brother bought me a little Teenage Engineering PO-16 as a gift in 2019, I had no idea what that would lead to, but man, the world of synthesis completely blew me away.

I think musicians should have to learn synthesis. It informs SO much about everything we experience audibly. My first analog synth was the Moog Sub25. It gave me a very simple and amazing sounding platform to learn subtractive synthesis and build from there. This obsession with creating and manipulating sound is what pushed me toward modular.

The Sub25 and the Arturia Polybrute are my staple instruments. They make their way on nearly everything I make. The Polybrute is a newer synth, but I’ve had it for over a year and it is an absolute workhorse. I also have to shout out the Moog Subharmonicon, the second synth I bought. It not only blew me away with the concept of an instrument inspired by subharmonics and polyrhythms, but it brought me into the world of sequencing, which I previously had zero experience with. 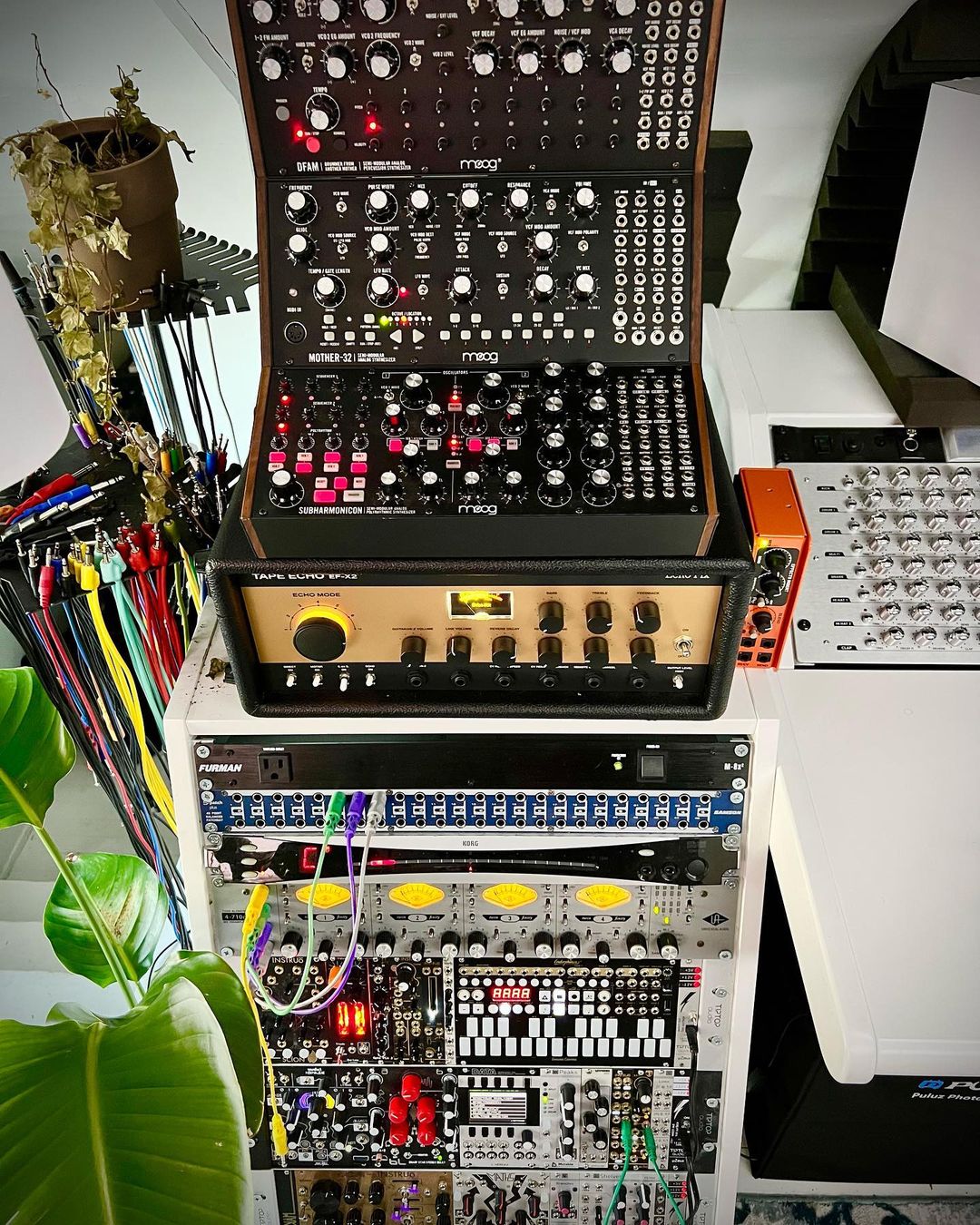 When it comes to microphones, what do you look for when picking up a new mic?
I view mics as instruments. Recorded music is its own art form apart from performing music and the microphones used can sometimes have as much of an effect on the sound as the topology of an instrument can. So I’m looking for sounds that I don’t have basically! For those fortunate enough to have anything like a “mic locker,” I view this as having multiple kinds of instruments as a composer.

What made you decide to pull the trigger on the 017 TUBE? How would you describe its sound?
It started with the desire to have a top level vocal mic. I had been producing more artists besides myself and needed a workhorse that would be a good starting place for most vocalists. I found that and far more! I have been extremely impressed with its performance and the genuinely wide array of sources I can put in front of that thing and smile very quickly.

What are some of your favorite sources to use the 017 on and why?
Definitely vocals. I tend to aim toward the intimate, close sound when placing (perhaps) the most important sound in your mix. Not every project calls for that, but I found the clarity, balance, and ultimately pleasant top end to be what most excites me.

As I said, I haven’t tested this to the fullest, but I haven’t found a source that sounds bad through this thing. One other happy discovery was using it on solo double bass at a little bit of a distance in a good acoustic. It performs amazingly well on the low end and I’ve added double bass on projects that I wouldn’t have if I didn’t know that I could get that sound. 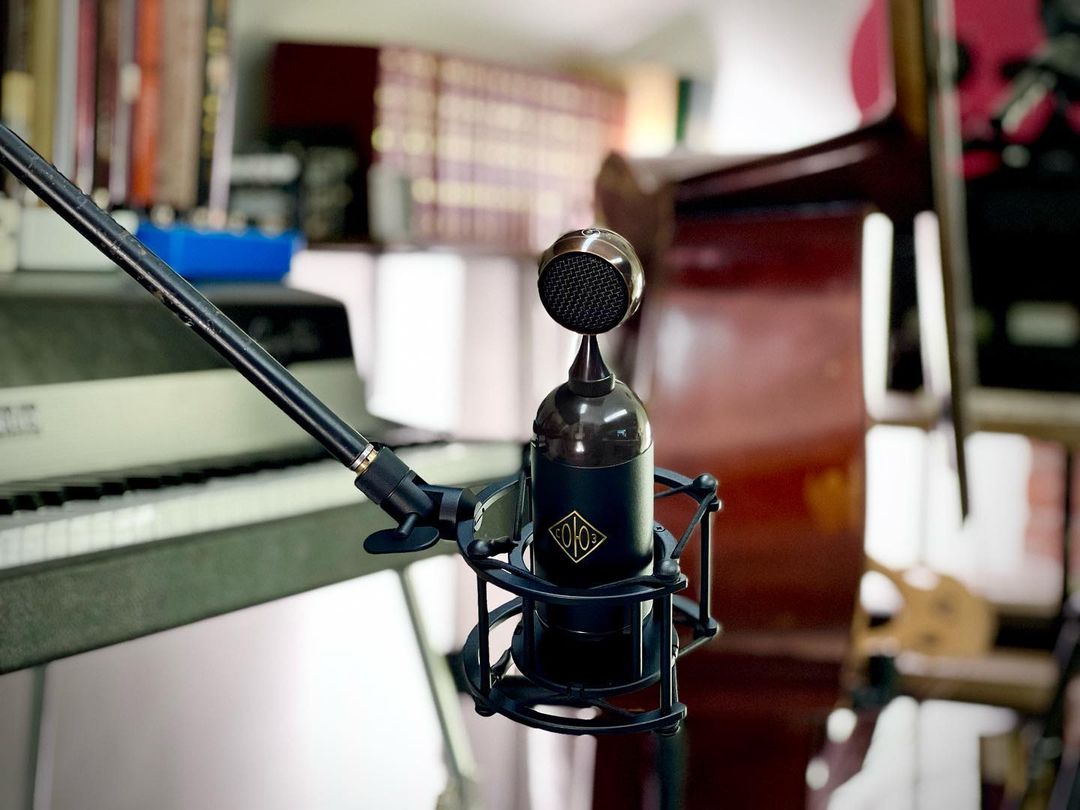 Do you have any mic pres, outboard gear or plug-ins that you love to use when you’re recording with the 017?
Admittedly, mic pres have not been a huge focus for me. I have the 4-710d and the Unison preamps on all the Apollos. That said, I was very excited by the sound I got from running vocals into the preamp / tape of the Echo Fix EF-X2 Tape Echo. The interaction and complexity of the sound with those two was magic.

Tell us a bit about the unique build you’re doing Heights Theater. What’s the goal for the space and what’s involved in the renovation?
Some dear friends and I have been slowly building a commercial studio out of an historic theater we co-own together in Cleveland. It was originally built in 1919 as a silent movie house (a pretty massive one – 1200 seats and owned by MGM studios). We are finishing up a multi-year renovation of what we’re calling Studio A, the original main floor of the theater. It’s a stunning space with the original terraced, plaster ceiling, 3000 sq. ft of live room space, and 40 ft ceilings.

Studio B is what was originally the balcony and was separated into its own room in the early 90s. This studio is highly specialized as a tracking studio to capture acoustic sound, particularly large ensembles. I was fortunate enough to work with our architect and an acoustician out of Chicago to design and fabricate the giant panels installed on the walls. It is about as custom as a job as it gets and we cannot wait to get in the space soon! 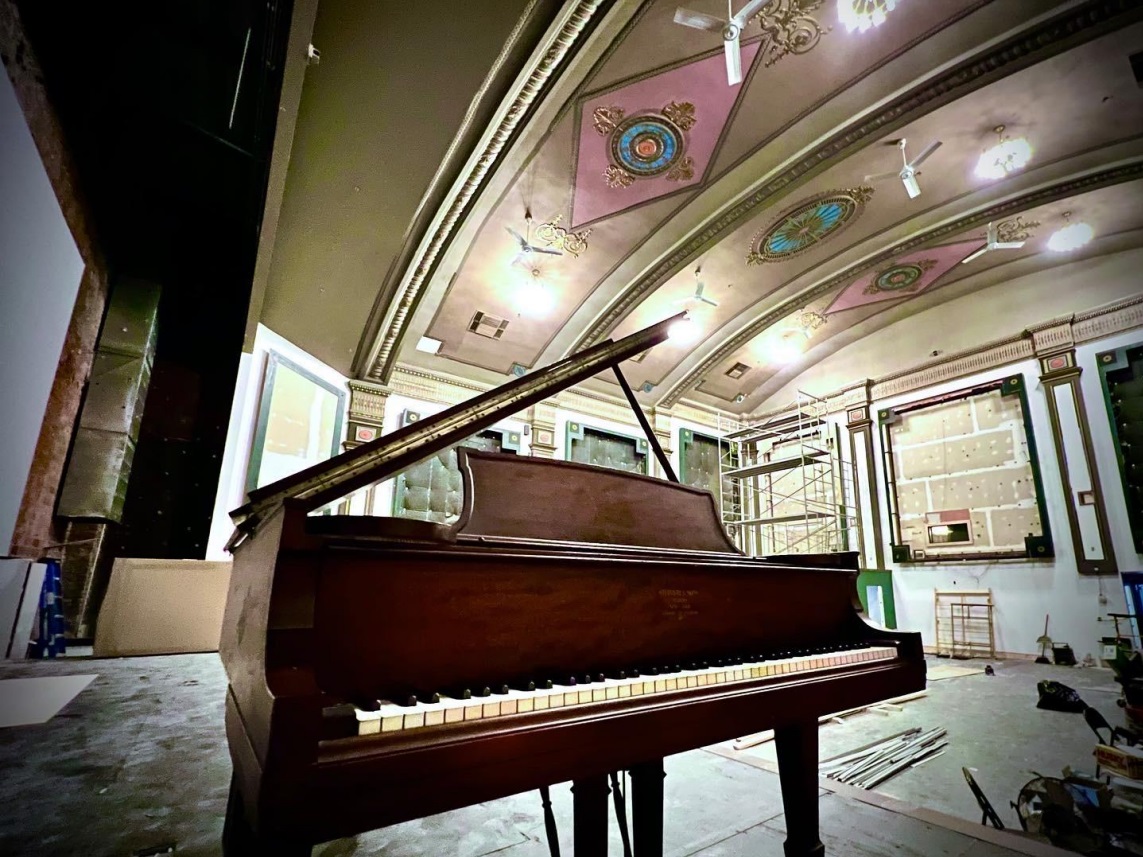 What are your hopes for this beautiful space?
One of the major goals of this new space is to be the home of a company I’m a part of starting. We plan to offer small and large ensemble services for film, television, video games, and more. Cleveland has a rich symphonic tradition that we hope to draw on and lead to surprising cross-genre collaborations. More to come very soon! 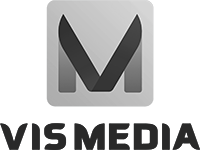