Kick drum is one of the most difficult instruments to record. It has the lowest of the lows, a thick midrange, and often, a bitey top end. How many times have you put up a microphone to find that your recording sounds nothing at all like the sound you’re hearing in the room?

Not only does a kick drum cover the whole frequency spectrum in great detail, but their sound also changes drastically depending on where you’re standing in a room. To make matters more complicated, there are not many single microphones that can capture all of the details that a kick drum produces– which is exactly why the Bomblet was created.

Putting the Bass in Bass Drum

The Bomblet was designed with a significant bump at 100Hz– the exact frequencies that give your kick drum the oomph and feel you’re always looking for. There is a reason the kick drum was originally called the bass drum and the Bomblet helps it live up to its name. Most kick drum microphones capture some lows, scoop out most of the mids, and boost the top end to give an exaggerated clicky sound. The Bomblet was tailor-made to record the kick drum sound that you want to hear. It starts rolling off at 15kHz which allows it to capture the perfect amount of top-end while ignoring pesky cymbal bleed. And it has a natural midrange to grab the meet of your kick.

Tons of Techniques for Different Styles

The Kick drum can be the driving force of power, rhythm, and movement in your production. Sculpting just this part of your drum tone has a big impact on how the overall song is felt and perceived. There are tons of different ways to mic a kick drum. You can put the mic inside of the porthole, outside of the porthole, to the side on the resonant head, or pointing towards the beater. You can place your mic a few inches away or a few feet away. Every spot is going to give a significantly different sound.

The first rule is to listen to the kick in the room. Search for where you like the sound. That could be a few inches away or a few feet away depending on the sound that you’re trying to capture. If your kick sounds too boomy in the room, try putting a pillow inside of it that touches the resonant head. If it sounds too dead, make sure nothing is inside of the kick drum or try tuning it to sound better in your space.

When looking for a full-bodied and realistic tone, placing a mic outside the bass drum is the perfect way to make the kick both heard and felt.

While a mic inside the kick drum can accentuate the click and attack of the beater, the outside mic can capture an organic and rounded representation of the drum itself and can be the glue in your kit with its solid low-end.

The Bomblet is simply a natural pairing here as it delivers a thick low-end push without getting lost in pillowy transients. The FET design of the Bomblet works to give a musical balance of thud, snap, and weight to the kick resulting in a nice chesty attack that cuts through a mix in almost a “pre-mixed” way. Mic placement here is incredibly simple, and the workhorse nature of the Bomblet gets a consistent sound dialed in quickly. 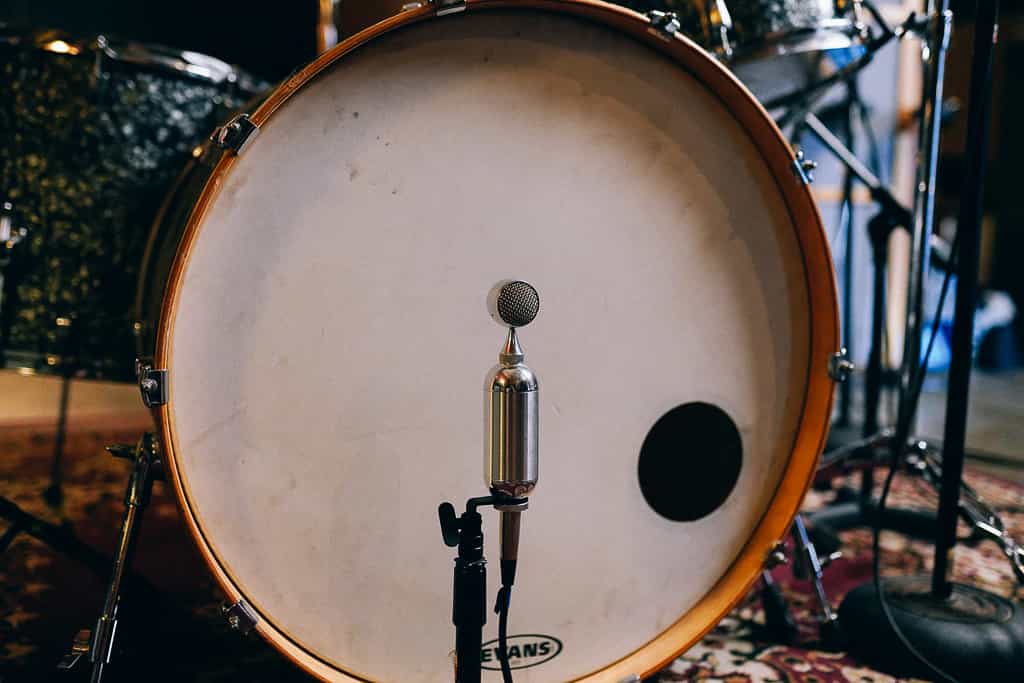 Regardless of whether or not the mic has a port, Position the mic at the center of the head just a few inches back. Scientifically speaking, low-end frequencies produce a larger “waveform” which in turn takes longer to “bloom”. This distance allows you to get a fuller image with a more realistic depiction of the drum itself. Right away, you should expect to hear a nice meaty thump and a natural oomph from the low end. This centered position should also give the most attack as it’s in line with where the beater strikes the drum.

For deeper and more expansive lows, you can use the Bomblet’s proximity effect to your advantage by bringing the mic closer to the outside head. With the Bomblet, you won’t have to worry about typical side effects here such as your sound getting flabby or the bottom end feeling murky as low frequencies stay defined and focused.

For more of a resonant tone with less thump, move the mic towards the rim. This can bring about more of the sound of your particular drum and the subtitles from it’s tuning.

It’s important to stress that while the mic may sound amazing solo’d, if you’re using a more complex mix setup, you’ll want to toggle the outside kick mic in and out of context to get a proper gauge how it is affecting your overall sound.

Is it complimenting your overheads? Is it overpowering the rest of your dynamics? Is it not hitting hard enough?

Listening in context here will help you fine-tune your placement as you can fill in any holes you may feel in the bottom end, or back off for more sonic space. It can be great practice to view the outside kick mic as a compliment to your overheads. In fact, in a minimalist setup, this would be used as an “anchor mic” for your sound.

You’ll want to tweak your mic placement for a different stylistic choice depending on the genre, but we say let it bleed! The Bomblet has a very smooth and pleasing off-axis coloration meaning that any bleed from the rest of the kit will sound musical and tie into your overall stereo image nicely. You can use this grab a sense of size and weight from the kit overall while a single overhead can get the air and sizzle.

Bonus Tip: In the studio, sound can work magic in unexpected ways. The same way that a tiny amplifier can sound monstrous, your choice of kick drum can give surprising results. You don’t necessarily need a 26” kick drum to get a massive low-end in a recording. A small kick can deliver exceptional punch and a focused tone that will be exaggerated by the outside mic.

Fix Your Mix With a Room Mic
Most Recent Posts
Soyuz Spotlight: Decibel Studios
Visit Soyuz Microphone At The NAMM Show 2022
Creative Like Clockwork With De’Anza
Soyuz Announces Addition Of 023 Brass Black To Limited Edition Microphone Series
Soyuz Spotlight: Honeytone
[verge3d id="14338" title="017"]
When we call the 023 our "workhorse," we mean it!

Our friends over at @sweetwatersound recently host

@decibelstudiosla has already left its mark on the

We know your favorite mics to run in stereo, but w

Thumbs up 👍 if you're using a Soyuz on a sessio

No matter whether it's on an amp, on the floor, on