When the world began to slow down in 2020, Charles de Villiers saw the opportunity to take advantage of the downtime and create something new.

“I had to stay active, so I started to renovate this house,” Charles says of the space now dubbed Noisy Boat. “The house is from the 1980s, it was built by my mother when the land was really cheap in front of the ocean.”

Located in Charles’ hometown of Les Sables d’Olonne, France, Noisy Boat resides right on the seashore. The scenic views of the ocean are only matched by the tasty collection of analog outboard gear, microphones and instruments that reside inside the studio.

We recently sat down with Charles to learn more about life in Les Sables d’Olonne, the inner workings of Noisy Boat and some of his favorite projects recorded at the studio. Continue on to read our conversation and see more of this beautiful creative space.

What’s life in Les Sables d’Olonne like?
This city used to be called “the longest beach in Europe” and is still one of the most beautiful / longest at this point. To come to the studio house, you have to cross the forest that is next to the beach. It’s a 15-minute ride where you cross the woods to arrive at the seaside. Also, there are some vineyards on the way. French wine and surf, it’s all very lovely.

What’s it like working in a studio with views of the sea?
It’s trippy sometimes! Believe it or not, most of the people contacting me so far think the studio is actually a real boat that is moving across the ocean. The name I’ve chosen, “Noisy Boat” is also playing on that aspect and could be confusing. To be honest, I get seasick, so I couldn’t stand doing it. Also, recording on a boat wouldn’t be very useful for the process, unless you want to record whale sounds and dolphins (which could be fun).

Jokes aside, people really enjoy the astonishing views, including myself. The other day I was recording with a pop-rock band called Colors in the Street and the sun was setting as they were playing a Prophet synthesizer lead part, and it was just perfectly timed with the movement of the music.

So yes, I still discover myself surprised about how beautiful it can get. The sea is like a painting in movement, which evolves every minute from the worst stormy weather to the hottest day in the summer. The control room is so comfy and well isolated that you really feel like you’re in a movie, that’s the part I love the most about this place. 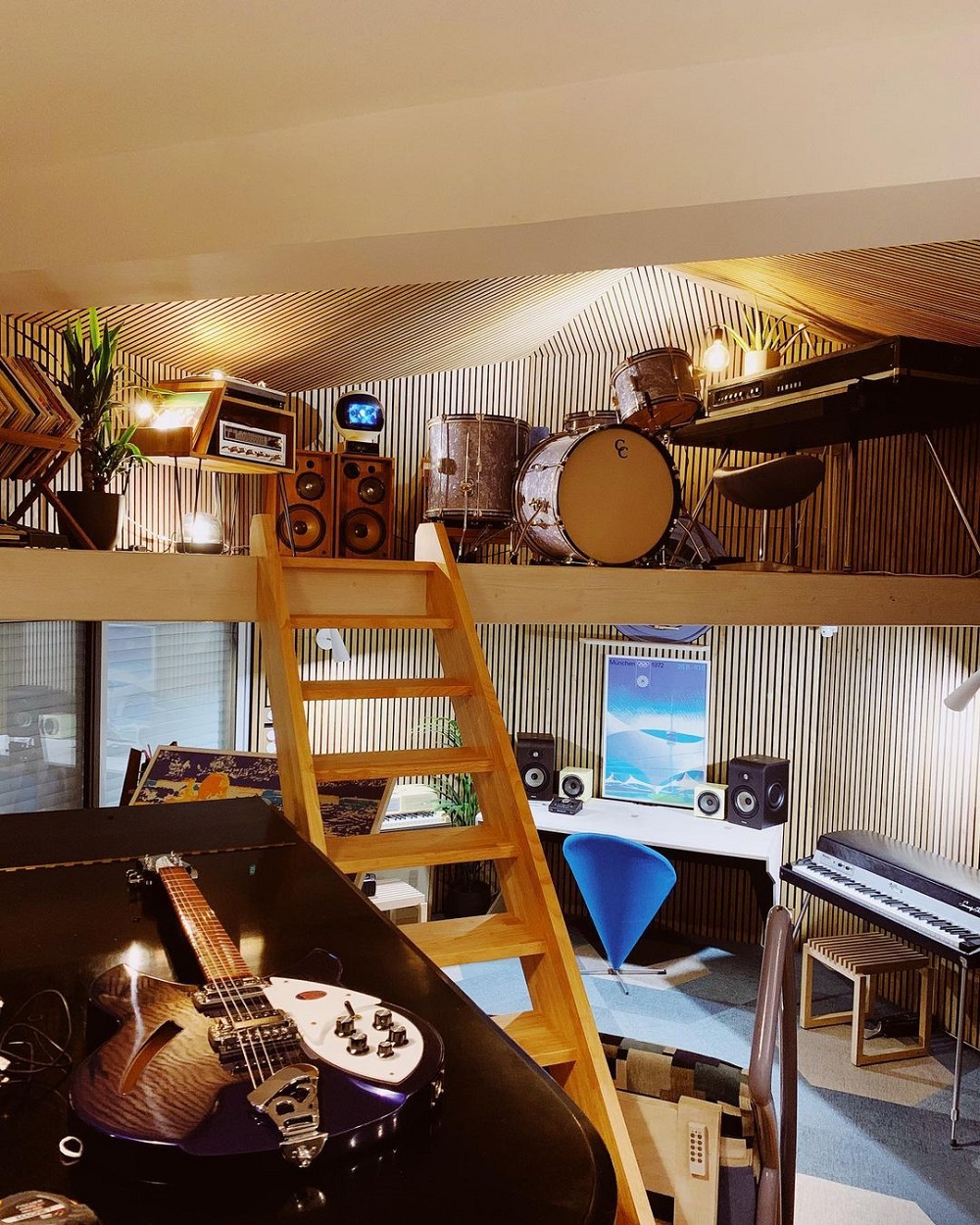 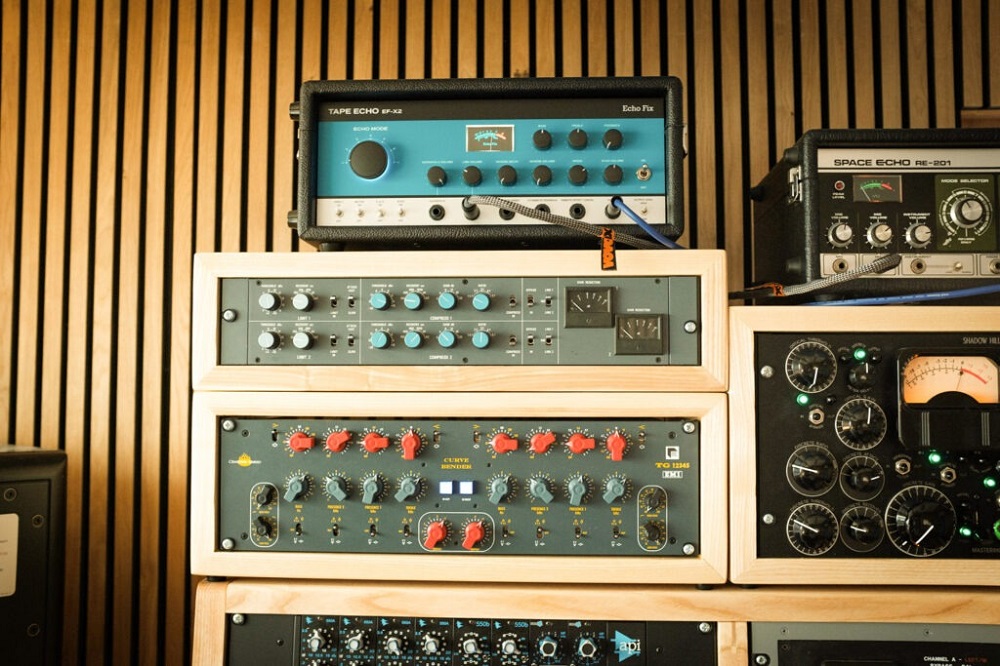 Tell us a bit about the recording studio itself. What was the process of turning the house into a studio like?
The first problem I struggled with was the room acoustics because you are inside a seaside house and you don’t want to lose the view by removing each bay window. So I had to change most of them to make the isolation and soundproofing as perfect as it can be. Changing the main bay control room glass was really challenging, a truck had to stay on the street in front of the house to carry it over onto the balcony with a crane.

The floor was made of tiles, which is horrible for acoustics, so I put in a wooden floor. Once the floor was there, I started to put the wood panels on each wall and extra acoustic materials. I wanted to do something that looked good and matched the seaside vibe.

I’m also passionate about Scandinavian design (especially Denmark), so it was a lot of fun to fill up the space. I love furniture and renovating it from scratch. If I wasn’t running the studio, I would have loved to be an interior decorator.

Are there any complications that stem from being so close to the ocean?
The wi-fi [Laughs]! Honestly, the internet connection has been quite challenging because the house is so close to the shore. We are at the end of the line, but we managed to find a solution, thanks to a friend who set up a boat antenna.

You actually need proof that you own a boat and have your driver’s license to buy these kinds of antennas [Laughs]. I don’t own any boat, but my sister got her driving license. So we bought the antenna, pointed it directly at a 5G relay and now the connection is superb. Job done!

Can you give us a quick walkthrough of the general workflow of the studio?
The heart of the studio is the eight-channel Tree Audio console built and assembled in LA. This is the first thing you see when entering the control room. It sounds magnificent, very clean. This console is also very simple and friendly to anyone who wants to record with it. I didn’t want to buy a big, intimidating SSL or another console. They are incredible, but I’m a bit sick of them, to be honest. I want to work fast and they scare the shit out of me.

I don’t monitor through the console but use a Rupert Neve Designs’ 5060 Centerpiece for that purpose. It’s a great summing mixer and it sounds superb. For monitors, we have a pair of Barefoot Sound MicroMains and ATC SCM150As. Great speakers, very complementary. Also, we own a lot of additional preamps (BAE, API, AEA, Telefunken) and a ton of very cool EQs and compressors! 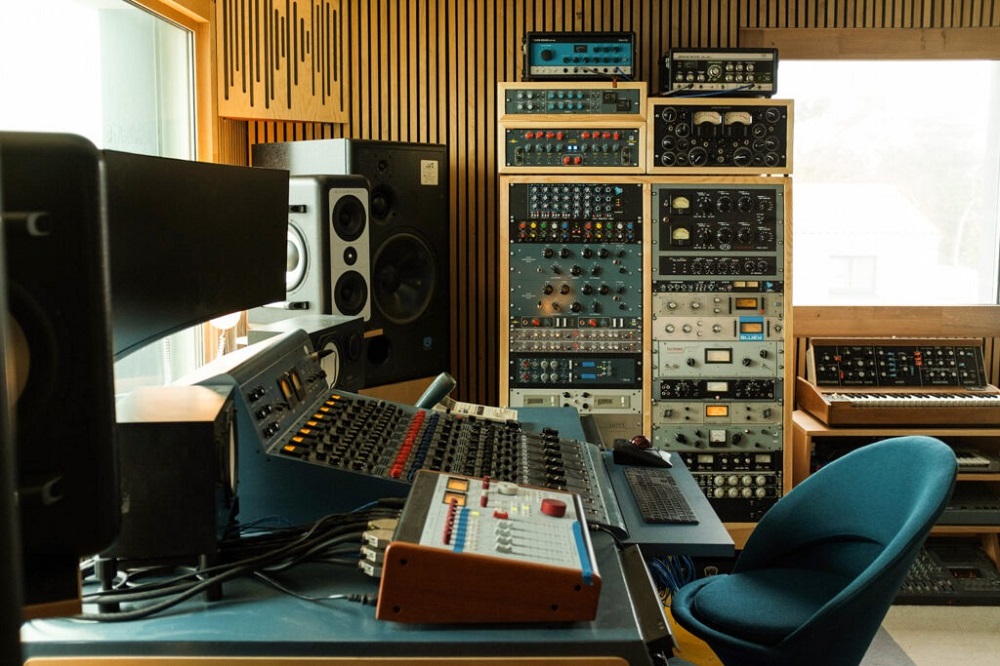 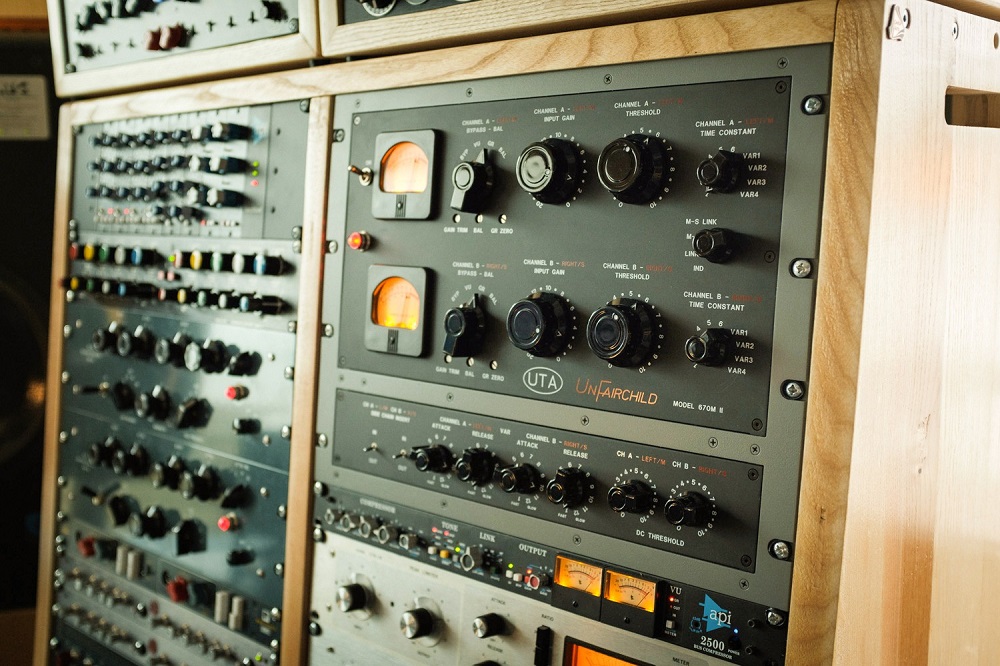 From looking at your list of gear, it’s clear you favor tangible, analog gear. What influenced your choices? Why do you prefer analog?
I’m not going to be that guy who says, “Analog is better, no matter what, you can’t beat it!” For me, it doesn’t matter if you own a cheap laptop and a 20 quid pair of speakers, it’s more about the mentality. Nowadays, with plug-ins and stuff, it’s become way easier to emulate the analog sound, but to me, there’s always going to be that five percent magical factor produced by an analog circuit that you will never be able to reproduce perfectly with digital.

Now is it good or bad? Neither to me, that’s just a choice. Owning analog gear will not make you sound good if you can’t play your instrument or sing with the right timing and on pitch. But if you’re playing your part right, it will magnify it and that’s for sure!

Even the newer gear you select, like Soyuz Microphones, have that classic feel to them. Is this what drew you to Soyuz in the first place?
Exactly! I love brands that are doing new things with vintage, so it’s what led me to Soyuz. As a gear and design lover, I’ve was blown away by the 017 design at first, then, after trying it, the sound also made a big impact. It’s really great when the design of an object inspires you as much as its main purpose. I really believe that gear won’t write the song for you, but it can definitely be inspiring.

I’ve seen you use the Soyuz 017 on piano. What do you like about using those mics specifically on that source?
As I luckily own a pair of 017s, I usually put one of them above the hammers, closer to the player, and the other in a further position, around the piano tail. Doing a balance of these two mics gives you so much, the sound is also very classy.

It suits every production and is very versatile, but as I’m mainly doing indie music when I’m recording on my own work, it gives you this extra classy touch on the piano. I would describe this mic as very classy. I’ve been trying dynamics and some other condensers that are more common, and they definitely lack this classy touch when I compare. 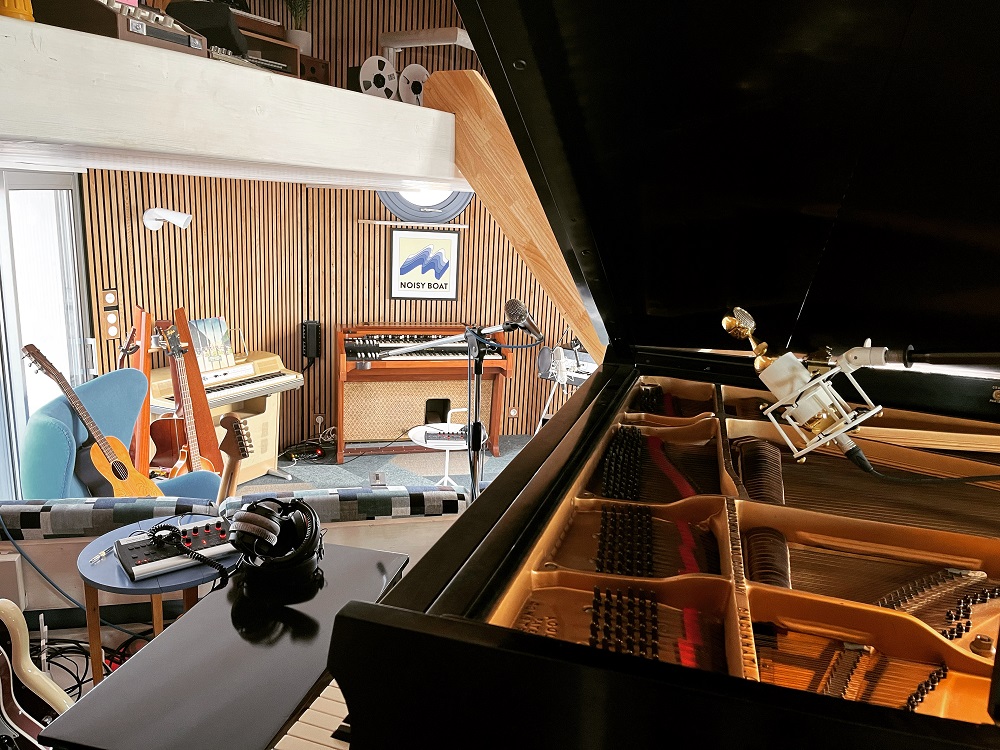 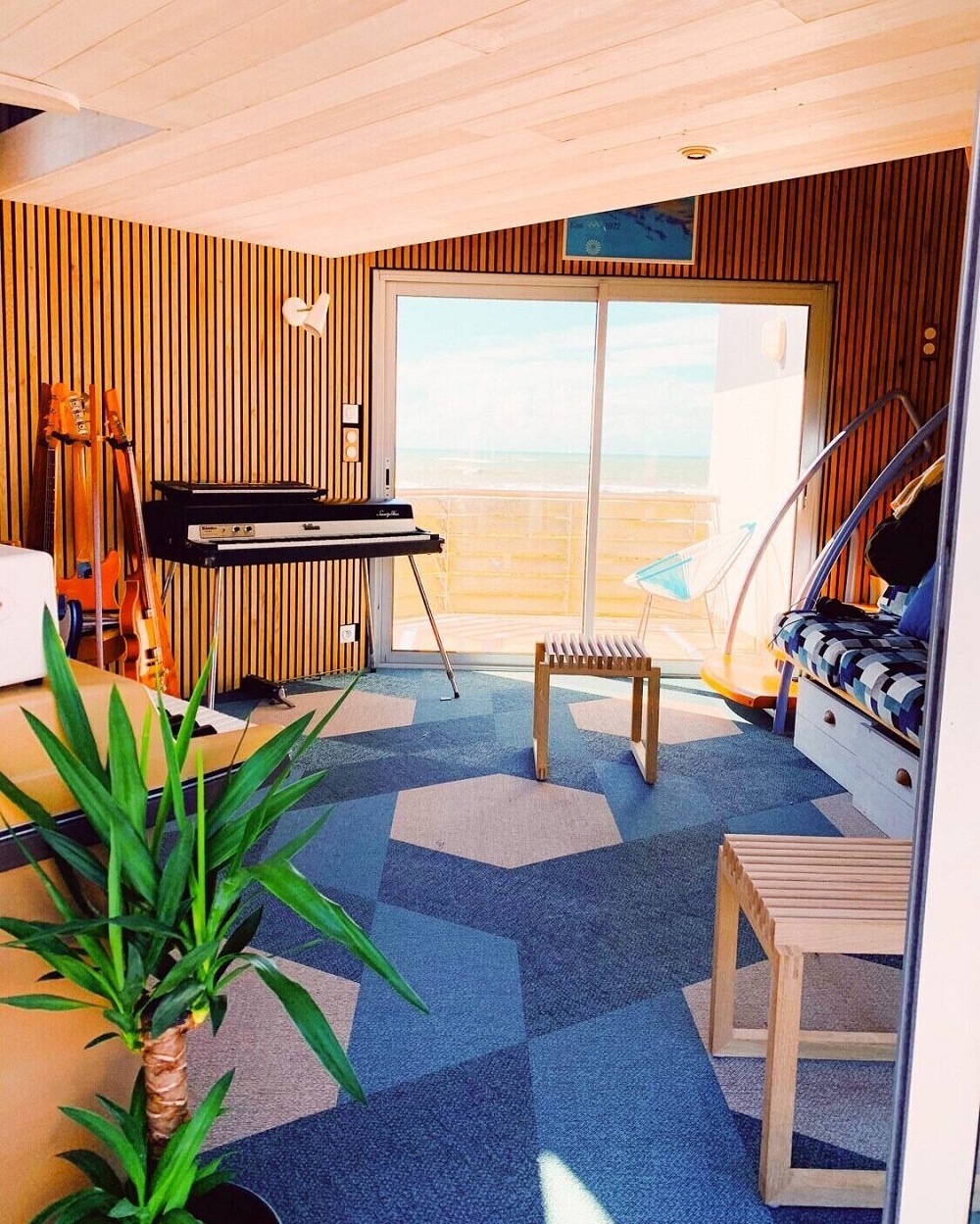 What are some other ways you’re using the 017 in the studio?
So far, I’ve been using it a lot on vocals as well, very clean and pristine on basically each type. It has this crystal touch on vocals, the high end sounds very natural and cool to me, especially on girls, it’s very pleasant.

In front of a guitar amp, if you want to compare it with a dynamic, it offers you a much different option. I usually use it with a good old SM57 if I want to vary the sound for a song on a whole album or EP.

You have quite the collection of outboard gear. Any favorites that you like to use in the signal path when tracking with the 017?
I’ve been using pretty much every preamp I got inside the studio with the 017 and they all sound great, but I’ve been blown away by how it sounds with the classic Neve 1073. Not very original I know, but I put it with an 1176 and LA-2A to complete my vocal chain, the results are so warm and absolutely incredible. I also have used it with the API 512c and 512v, Chandler Limited, Telefunken… I just think you can’t go wrong with that mic and that it will fit well with any preamp’s color.

What are some of your favorite projects you’ve worked on at Noisy Boat? What are some upcoming projects hitting the studio that you’re excited about?
I started the year recording with the French artist Janie. She’s a very talented, always on pitch singer and skilled piano player in the pure tradition of the French feminine artists such as Veronique Sanson. And we’ve been using the 017s on the piano all the time for this project, and also on her vocals. It was perfect!

We also had the pleasure to welcome one of the biggest French artists at the moment named Vianney. That was a lot of fun, he is also passionate about gear so we were always diving into gear talks and nerdy stuff [Laughs]. In a couple of days, we’ll be welcoming the singer and former member of the band Lily Wood and the Prick, who booked the studio for a week. Exciting stuff to come!